Another early bath for Red Bull 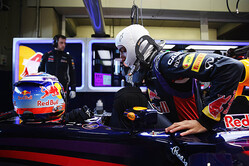 For the third successive day, Red Bull has encountered problems which have prevented it carrying out any worthwhile running.

Whilst almost all the teams were side-lined on Tuesday, yesterday it was the Renault powered outfits that were still suffering, between them covering just 19 laps.

The situation has continued today with the team opting to end its day early in an attempt to resolve the problem ahead of the final day's running.

Taking over from Sebastian Vettel, Daniel Ricciardo, under the watching eye of Red Bull owner Dietrich Mateschitz, had barely left the pits when his car ground to a halt bringing out the red flag. The Australian subsequently completed two further laps before the team decided to call it a day.

"Despite intense work overnight to correct the issues that caused the team to halt its programme early yesterday, we had to again cease track activities this afternoon," the Austrian outfit said in a press release.

"Daniel Ricciardo completed a handful of laps in the RB10 before issues similar to yesterday's forced him to stop. The team will now spend the remainder of today investigating the causes in order to ready the RB10 for tomorrow.

"We worked hard yesterday to make the changes it was felt were necessary to overcome the problems we identified and we were hopeful of a more successful day today," said Race Engineering Co-ordinator, Andy Damerum. "Unfortunately, the measures we took only partially solved the issue and, as with yesterday, it's more sensible to stop and dig deeper into finding a solution.

"It's obviously not where we want to be and naturally the whole team is frustrated by these issues. However, we're pretty good at bouncing back from this type of thing. This is where the whole team pulls together and I'm sure we will get these problems fixed."

Such is the obvious concern, Christian Horner and Adrian Newey were subsequently seen leaving the track, the pair understood to be heading back to the team's Milton Keynes HQ.