The Mercedes F1 W05 is unveiled 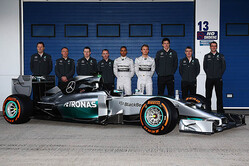 Mercedes has unveiled its 2014 challenger, the F1 W05, at Jerez today ahead of the opening pre-season test.

Nico Rosberg and Lewis Hamilton took the wraps off the first all-new Silver Arrow to hit the track since 1954. Designed from the ground up as an integrated project between the Mercedes-Benz teams based at Brackley and Brixworth, this new car marks an historic milestone in a landmark year when Mercedes-Benz celebrates 120 years of Motorsport and the 80th anniversary of the Silver Arrows.

The 2014 Formula One season marks the biggest change in regulations in the sport's history and the F1 W05 has been designed to meet the challenge of this technical revolution. The initial engineering conversations between the teams at Brackley and Brixworth around both the regulations and potential solutions date back to late 2010. Since mid-2011, when the rules for the new V6 Hybrid Power Unit were officially published, Mercedes-Benz has taken a fully integrated approach to every major performance decision with a clear-sighted focus on maximising overall car performance.

The result is the new F1 W05 and, at its heart, the PU106A Hybrid Power Unit, both designed to meet the challenge of a fundamental change in the philosophy of Formula One. The introduction of a demanding maximum race fuel allowance of just 100 kg per race, coupled with a maximum fuel flow rate of 100 kg/hour, have focused the efforts of the sport's engineers on delivering performance with a set of innovative new technologies that achieve an efficiency gain of more than 30%.

The F1 W05 will therefore deliver over one third more performance from every unit of fuel consumed, a development story that places the new Hybrid Formula One at the cutting edge of automotive technology - and puts the sport on the same development path as the wider automotive industry.

"It is always exciting to pull the wraps off a new car for the first time but even more so at the start of this momentous 2014 season," said Toto Wolff, Executive Director (Business) of Mercedes AMG Petronas and Head of Mercedes-Benz Motorsport. "Our new Silver Arrow is the result of a single-minded, integrated approach between our engineering teams. My compliments and thanks go to every team member in Brackley, at Brixworth and also at our key partner, Petronas, for their hard work to deliver this new car and the Power Unit at its heart; it is the result of several years of intense effort. But we know that the adventure has only just begun. We have a busy winter testing period ahead of us and a long season where both performance and reliability will be critically important. Lewis and Nico begin the season hungry for success and I am confident that our team will benefit thanks to the continuity of their work during the winter period. We have positive momentum after our second-place finish last season. Our clear target is to continue building up our team and we aim to deliver on every single race weekend in 2014."

"For 2014 we have probably the greatest change in regulations in Formula One history and the start of a new era for our sport," added Executive Director (Technical) Paddy Lowe. "From a technical and also a racing perspective, this is an incredibly exciting time for Formula One. We are introducing technologies that are new not just to racing but to the wider automotive world as well. The headline is that of improved efficiency and the fact that we will be completing races with advanced Hybrid systems on just 100 kg of fuel sends a great message about the technology that Formula One can deliver. But it is also about the technology that Mercedes-Benz can develop compared with our competition, both for the chassis and the new Power Unit. The whole team has done a fantastic job on the management of the project and its delivery. We have hit our milestones and hit our targets but, as ever, we will only begin to understand how successful we have been once we begin running in anger on track. The new car is an elegant but aggressive design and, as is often the way, its beauty is much more than skin deep; the internal engineering of the car is extremely innovative and intelligent. Our team can be justifiably proud of its work so far - but none of us are under any illusions about the amount we still have to do before the first race in six weeks' time."