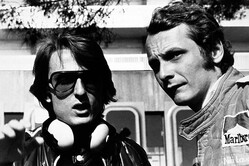 Niki Lauda, who won two of his three titles with Ferrari, paid a visit to the team's Maranello HQ on Friday, the day before it launches its 2014 contender.

The Austrian, who is now Non-Executive Chairman at rivals Mercedes, wasn't attempting to get a sneak peek of the (oh so subtlety named) F14 T, but to discuss the future of the sport with Ferrari President Luca di Montezemolo, who was at the helm of the team when Lauda won his titles (the two pictured here at Monaco in 1975).

Like most of us, Lauda is intrigued by the forthcoming season and its raft of regulation changes, warning the reliability will be the key.

Speaking of the Ferrari launch, indeed, all launches, the Austrian said that it is one of the most important, but the more important day will be next week's test at Jerez.