Di Resta back in DTM 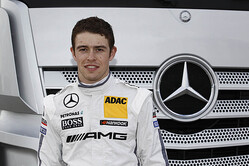 Having failed to secure an F1 seat for 2014, Force India driver Paul di Resta has returned to DTM.

The Scot, who at one stage was linked with Ferrari, Mercedes and McLaren, found himself out of a job with Force India following a (mostly) disappointing season which ultimately saw the Silverstone-based outfit drop both its drivers.

Whilst Adrian Sutil was able to find a berth at Sauber, di Resta, who had been linked with a move to IndyCar, possibly replacing his recently retired cousin Dario Franchitti, has opted to return to DTM the legendary German touring car series he won in 2010.

Driving for Mercedes-Benz, the Scot, who contested DTM from 2007 to 2010, securing six wins, six pole positions and seven fastest laps from 42 races, will be partnered by another DTM champion, Gary Paffett who took the 2005 title.

The Scot and Mercedes-Benz go back a long way - winning the McLaren Mercedes Champions of the Future Kart series in 2000. He became a Mercedes-Benz junior four years later, moving up in 2005 to the Formula 3 Euro Series, which he won with the Mercedes-Benz Formula 3 engine in his second season, beating off competition from four-time Formula 1 world championship title holder, Sebastian Vettel.

"It feels really good to be back in the DTM and to see so many familiar faces again," said the Scot. "The DTM is a fantastic racing series with three strong premium brands, a very competitive field and a very evenly matched bunch of drivers. I'm really looking forward to working with the whole Mercedes-Benz DTM team and being part of another championship challenge.

"Much has changed since my last DTM race in Shanghai in 2010 with new cars, a new set of rules and a third manufacturer, but what has not changed is my enormous appetite for success. Mercedes-Benz has given me a car that I can use to fight for wins and the title. However, I realise that it will not be easy. My competitors already have two years of experience with the new generation of vehicles, but, starting with today's first test, I'll be going flat out in order to be capable of winning at the Hockenheim season opener in early May."

"Paul has been a member of the Mercedes-Benz family for many years," added Mercedes-Benz Motorsport boss, Toto Wolff, "and we are delighted that he is returning to the fold this season to further strengthen our DTM squad.

"He has learned a lot during the past few years in Formula 1, and, together with Gary Paffett we now have two experienced drivers in our team, who have already won the DTM title with Mercedes-Benz and can put their knowledge to good use on the track, whilst passing on hints and tips to our Mercedes juniors."