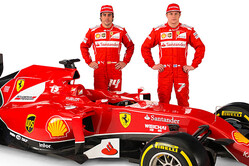 As part of today's launch, Ferrari invited fans to send their question in to drivers Fernando Alonso and Kimi Raikkonen, the team selecting ten for each driver to answer.

Long before the 'fire and ice' drivers hit the track, the difference between the two is all too clear in these two videos.

Fernando spends 12 minutes 39 seconds answering a range of questions in Spanish, English and Italian, the two-time world champion getting into the spirit of things as he gives advice on karting and reveals what cars he keeps in his garage.

On the other hand, you won't be surprised to see that Kimi manages just under seven minutes, much of that looking rather suspiciously at the screen in front of him.

When he is asked to reveal the worst decision he has ever made we fully expected to hear him admit that agreeing to this Q&A was right up there but he doesn't. Instead he reveals that when he's got time off and he's not training he likes to watch "movies". He also vaguely remembers cooking something for him mum once but can't recall what it was or whether he liked it.