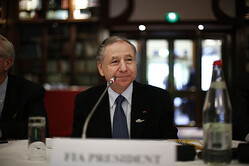 With no opposition, it came as no surprise when Jean Todt was today re-elected for a second term as FIA president.

The Frenchman, who previously enjoyed success as motorsport boss at Peugeot, in terms of Rallying and Sportscars, and then with Ferrari, overseeing F1 titles wins with Michael Schumacher and Kimi Raikkonen, was elected president of the FIA in October 2009, enjoying the full support of Max Mosley.

Despite a number of controversies, especially the dithering over the 2011 and 2012 Bahrain Grands Prix, Todt has pretty much kept out of the spotlight during his first term, especially in terms of F1, and in stark contrast to his predecessor.

His only opposition in terms of his re-election came from David Ward, a former advisor to Mosley who, ironically, had helped mastermind Todt's previous campaign.

Ward, who had argued the need for a major overhaul of the FIA, especially in terms of democracy, transparency and financial accountability, withdrew his candidacy last month thereby leaving Todt unopposed.

An FIA spokesman revealed that the 250 delegates at the Annual General Assembly had voted without abstention for the Frenchman.

Following his re-election, Todt revealed his team's plans for the next four years, saying that while the goals they have set out are "ambitious, they are built on the solid foundations that the reforms of the last four years have put in place".

"I want to let you know how much your warm support moved me and influenced my decision to run again," he told the assembly. "As a team we decided to put ourselves forward to continue the work of our first four years and introduce a new platform for our federation. We are aware of what we need to do for our organisation to take the next steps and we are determined to succeed, with your help."

The President, who was joined by his re-elected team of Senate President Nick Craw, Deputy President Sport Graham Stoker and Deputy President Mobility Brian Gibbons, then continued by outlining his vision for the future of the FIA, focusing on the 'four pillars' described in the team's manifesto.

"The first pillar aims to continue improving the governance and administration of the FIA," he said. "This was a priority for our first term and will remain so for the next four years. We have decided that the Statutes Review Commission should continue its work to assess the reforms which have already been implemented and propose, if necessary, further improvements."

The administration will be further enhanced by the creation of a Resource Allocation Working Group, composed of representatives of clubs from around the world. "It will be their task," he said, "to determine together how best to use the new resources arising from new activities and including the renegotiation of the Concorde agreement."

The FIA will also establish ASN and Mobility Club Liaison Offices to provide a one-stop-shop for members seeking advice.