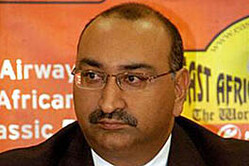 Surinder Thatthi, a leading supporter of Jean Todt has been accused by the Kenya Motor Sport Federation (KMSF) of serious financial impropriety. In July Thatthi was suspended from the KMSF for twelve months. The KMSF has alleged that the 55-year-old former organiser of the classic Safari Rally had failed to refund money owed by Thatthi to the Federation. The Kenyan ASN informed the FIA of Thatthi's suspension and forwarded the details of the alleged financial impropriety under confidential cover to the FIA Deputy President Graham Stoker.

Despite the KMSF action's Jean Todt has again invited Thatthi to serve on his election list as Vice President for Sport for Africa. Thatthi, who is a Kenyan citizen, has held the office of Vice President for Africa since 2009 but as a nominee of Tanzania. Now Thatthi has switched clubs again and has been nominated in the 2013 election by the South African ASN, Motorsports South Africa.

According to the FIA's Internal Regulations "a delegate who has been elected to any FIA body shall lose his office in the FIA if he is no longer recognized by his Automobile Club, Automobile Association, National Touring Club or National Federation" (Article 2). This would seem to rule out Thatthi from serving on Todt's list. However, in a recent letter to the KMSF, the FIA's Chief Administrative Officer Damien Clermont has dismissed the Federation's objections and confirmed the FIA's view that "the internal issue within the KMSF is not likely to impact the validity of a candidature now put forward by Motorsport South Africa".

The KMSF has nominated its preferred candidate Jim Kahumbura to the FIA's World Motor Sport Council and written a letter to Motorsport South Africa expressing its concern. Under the FIA's election rules Jean Todt's candidacy must be supported by a list of seven Vice Presidents for Sport with one representing Africa. Thatthi's nomination by the South African ASN is, therefore, crucial for Todt's list to be eligible.

Unlike the list system used in the sport, the mobility clubs of the FIA elect their own Vice Presidents. In May this year the President of the AA of Uganda John Mutenda was elected Vice President for Mobility representing Africa in FIA Region 1. If the FIA's African sports clubs had the same opportunity to elect their own representative directly then the current unsavoury mess surrounding Thatthi's nomination to Vice President would almost certainly have been avoided. A number of African clubs, including the KMSF and the AA of Uganda, have tabled statute amendments to this week's FIA General Assembly proposing to remove the requirement that Vice Presidents for Sport must be included on the presidential list. However, the FIA President is opposing this reform so it is unlikely to be passed.

Contacted by Pitpass, Mr Thatthi said: "The matter of finances at the Kenya Motor Sport Federation has been resolved and the funds were paid back to the Federation. Please note that the funds to run a round of the Kenya National Rally Championship were originally paid out with complete agreement of the KMSF General Manager Mr. Mwaura Njuguna and then KMSF changed their stance and claimed that the funds were paid wrongly.

"I do have a letter from the KMSF stating that the alleged suspension (not done at a proper meeting of the KMSF)will be withdrawn should the funds be returned to the KMSF. This has been done since so I believe all is settled already."

While the KMSF did indeed confirm that the funds have since been returned, they informed us that Mr Thatthi remains suspended.

Mr Thatthi's ability to jump from representing one country to another is somewhat similar to the row which engulfed International Cycling earlier this year when one of the candidates for the International Cycling Union's presidential election was nominated by Swiss Cycling after failing to secure the backing of his home federation, Cycling Ireland.

In a move which caused outrage, constitutional changes were introduced which included the provision for presidential candidates to stand if they were nominated by any two national federations... the new rule to be enacted retrospectively.