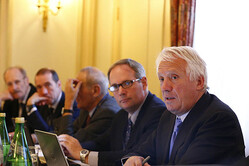 A meeting of F1 race stewards in Paris saw them agree that continuing to pursue consistency in decision-making during Grands Prix is vital in terms of maintaining credibility.

The review of performance during the 2013 season followed on from a meeting held earlier this year, at which the stewards and F1 Race Director Charlie Whiting met with drivers and team representatives who highlighted a number of key issues they believed would help the stewards reach their goal of uniformity in decision-making.

The meeting also took time to consider a number of incidents from during the season, with issues such as drivers leaving the boundaries of the track and possibly gaining an advantage being reviewed, again in a bid to find a consistent approach to ruling on such transgressions. Yesterday's meeting was also another opportunity for those in attendance to examine the regulations for the coming season which sees the introduction of the biggest swathe of rule changes in living memory.

Commenting on the meeting, Whiting said that good communication was a key element in keeping stewards up to date, adding that their twice-yearly meetings, which included Thursday's, are a critical part of the their duties.

CAMS' Garry Connelly, a regular Chair of the F1 stewards and Deputy President of the FIA Institute also took time out to pay tribute to all the FIA staff present at Formula One race meetings, saying that their dedication was crucial in the smooth operation of events.

Whiting also thanked the F1 media for their co-operation and understanding during the season just gone.

Finally, he added: "As a group, the F1 race stewards are clearly determined to continue improving the system of stewarding, which is extremely important to Formula One."