Sylt shoots himself in the foot 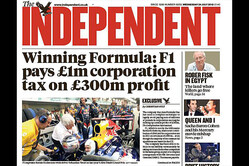 Tonight the prestigious British Journalism Awards take place in London's financial district and Pitpass is represented by business editor Christian Sylt who we would like to wish good luck. Sylt has been short-listed for Sports Journalist of the Year which may seem like a strange choice given that he specialises in covering the business side of Formula One but in fact it is this kind of work, which digs behind the scenes of sport, is precisely what the awards hosts were looking for.

The awards were launched last year by influential media industry publication Press Gazette and, according to its editor Dominic Ponsford, part of the driving force was "a response to the one-sided portrayal of our industry which was on display at the Leveson Inquiry. With the News of the World hacking trial now under way, and the reputation of our industry again under attack, it is just as important this year to publicly celebrate the good that journalists do."

The aim of the awards is to recognise journalism which is not just interesting but is also in the public interest and this is where Sylt's pieces are relevant despite not being about the events on track. Sylt openly admits that he is no expert on the sporting side of F1. The previous time he was in the paddock was at the British Grand Prix in 2010 and he admits that he couldn't tell you who won that race.

However, it is a different story when it comes to F1's finances as Sylt is the only journalist worldwide who regularly writes about the business of F1 for national media and he has been doing this for over a decade. In addition to being Pitpass' business editor he can be seen commenting on the F1 industry for the BBC, Bloomberg and CNN and, as a freelance writer, he reports for the majority of the UK papers. Indeed, although Sylt may not specialise in the sport of F1, he says he writes for more outlets than anyone else who covers it. He adds that this year's tally comes to more than 20 outlets with the circulation of the newspapers alone coming to more than 3.5m.

According to Press Gazette there were more than 300 entries to get on the short-list and the pieces that won Sylt's place aren't the kind of articles you will find elsewhere about the business of F1.

Sylt's entries to the awards were all covered in the greatest detail on Pitpass with the first being the news that German bank BayernLB missed the opportunity to make £500m by reinvesting in F1. This is of course a timely tale as it is at the heart of the court case currently raging in London. Next up was Sylt's interview with Ecclestone who told him that a Grand Prix through the streets of London, which was first rumoured by The Times, will not be going ahead.

The third entry was Sylt's revelation that in 2011 F1 paid a net total of £945,663 in UK corporation tax to HM Revenue & Customs (HMRC) on pre-tax profits of £305.6m. This was printed on the cover of the Independent and it sent some of F1's reporters into a bit of a frenzy trying to guess why it was written. One blogger wrote that it "looks like Sylt shot himself in the foot on that one. The Bernard is not going to be impressed by that story."

Another F1 correspondent said "it may be that the intention was to advertise to potential investors the fact that Formula One profits from such a good deal with HMRC." In fact, the reason for writing the piece was much more straightforward. This is that the article gets to the heart of the business side of F1 which underpins the sport and that was clearly spotted by Press Gazette.

All of the journalists who have been short-listed are entered into the Hall of Fame so, regardless of whether Sylt gets the top honours or not, he joins a distinguished group of sports reporters. They include the Daily Telegraph's Paul Kelso, Nick Harris of the Mail on Sunday and The Times' F1 correspondent Kevin Eason who was also nominated for Sports Journalist of the Year in 2012 and is the only other F1 reporter in the Hall of Fame.