The big hurdle in the case against Bernie Ecclestone 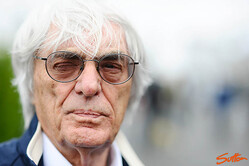 The trial against Bernie Ecclestone is approaching the end after nearly a month of hearings in London. German media rights firm Constantin Medien has accused Ecclestone and his Bambino family trust of paying a £27.1m ($44m) bribe to Gerhard Gribkowsky, a former executive at German bank BayernLB. The lawsuit claims that in return for the bribe Gribkowsky agreed to sell BayernLB's 47.2% stake in F1 to the private equity firm CVC in 2006. Constantin says other buyers would have paid more but it believes Ecclestone preferred CVC as it had agreed to retain him as F1's boss. In contrast, Ecclestone says the money was paid after Gribkowsky threatened to tell the UK tax authorities that he controlled Bambino. This is nothing new but what has not been widely-reported is that Constantin is well aware Gribkowsky was indeed trying to prove that Ecclestone controlled the trust.

Ecclestone says there is good reason why he paid his half of the money to stop Gribkowsky carrying out his threat. Bambino is based offshore but Ecclestone is a UK resident so he would be liable to pay tax on the estimated £2.5bn ($4bn) in the trust if he was found to be in control of it which he strongly denies. He says he paid Gribkowsky because his false allegations would have triggered a lengthy and costly investigation. In court earlier this month Ecclestone explained that if the investigation had gone against him he would have to pay "something close to 2 billion. And I thought paying 10 million to keep him from doing that was quite a good deal."

Both Ecclestone and Constantin agree that Gribkowsky was acting completely self-interestedly by receiving the money; they simply dispute the reason that it was paid. The evidence that Gribkowsky was acting in his own interests, and not those of BayernLB, is that he did not tell his colleagues on the board of the bank that Ecclestone was paying him. As Constantin's supervisory board member Dieter Hahn told the court on 1 November, "we have not alleged that any of the other members knew of these agreements at the board level."

Constantin claims that it lost out as it had an agreement with BayernLB which entitled it to 10% of the proceeds from the stake if it was sold for more than £678m ($1.1bn). CVC paid £502m ($814m) so Constantin did not get a payment but it believes it should have done as other buyers would have paid more. This is the background to its lawsuit and as Pitpass' business editor Christian Sylt recently revealed Constantin is demanding £87m ($140.4m) in damages from Ecclestone, Gribkowsky, Bambino and its former legal adviser Stephen Mullens.

Interestingly, although Constantin disputes Ecclestone's version of events it does not deny that Gribkowsky was trying to prove that Ecclestone controlled Bambino. When BayernLB owned its stake in F1 it had at times a particularly turbulent relationship with its fellow shareholder Bambino, which owned 25% of the sport. Although Bambino was only a minority shareholder in F1, BayernLB claimed that it controlled the boards of several key companies in the sport because Ecclestone was representing it as a director, something which he denied.

In 2004, Speed Investments, the company which owned BayernLB's shares in F1, sued Bambino to regain control of the sport's UK-based parent company Formula One Holdings (FOH). It won the case and followed it up with legal action in 2005 to get control of Formula One Administration (FOA) which directly held the rights to F1. Ecclestone personally owned a share in FOA and BayernLB claimed that he should not have had it as it prevented the bank from controlling the company. Ecclestone eventually settled the case and he says that Gribkowsky started insinuating that he controlled the trust whilst the legal action was going on. Perhaps surprisingly, Constantin agrees.

In 2011 Ecclestone revealed to Sylt that he had indeed paid Gribkowsky and he explained that during the legal action in 2004 "when they were talking about the trust, Gribkowsky kept on saying 'you mean Mr Ecclestone.' He said to me 'I could have gone much farther and deeper at the time but I didn't and, you know, I wondered if it ever happened again what would I say?"

Insinuating that there was a connection between Ecclestone and Bambino was part of Gribkowsky's strategy to win the court cases. The connection between Ecclestone and Bambino was at the heart of BayernLB's case as it claimed that he was its representative on the boards of the F1 companies. The last thing Ecclestone wanted was for Gribkowsky to suggest in court that Ecclestone controlled the trust so insinuating that this could happen increased the chance that the case would be settled in BayernLB's favour. Although Ecclestone was not found to be a Bambino representative this is exactly what happened.

In court earlier this month Constantin's QC Philip Marshall admitted that "there had been an attempt on the part of Dr Gribkowsky to get material to connect up Mr Ecclestone with control of the trust." He added that "he may have made remarks on this topic in the context of the litigation that had been brought in the early part of 2005 and which was only settled in August 2005 because, in fact, those acting on behalf of the banks did want to investigate the area of Mr Ecclestone's connection with the trust... They were looking for material with which to perhaps create some embarrassment on the part of Mr Ecclestone and Bambino."

So if Constantin accepts that Gribkowsky had in fact been trying to prove that Ecclestone was in control of Bambino then why does it not believe that Ecclestone paid him to keep quiet about these insinuations? Mr Marshall's response to this is that if Gribkowsky or his colleagues "had found something material, they no doubt would have deployed it, wouldn't they?" This has been repeated by Mr Marshall in court several times over the past few weeks but does it make sense?

In a nutshell, the argument proposed by Constantin and its lawyers Peters and Peters seems to be the following:

1. Gribkowsky was acting self-interestedly and not in the interests of BayernLB

2. Gribkowsky was trying to prove that Ecclestone controlled Bambino

3. If Gribkowsky had found any evidence of this he would have used it to benefit BayernLB in the court case

If Gribkowsky was acting self-interestedly, and is the kind of person who could be corrupted by accepting a bribe, then if he had discovered evidence which could be used for personal gain it seems unlikely that he would have deployed it to benefit BayernLB in the litigation.

Constantin believes that Gribkowsky acted against BayernLB's best interests by accepting a bribe to undervalue F1 so why does it believe that he would have had to act in its best interests by deploying any evidence in the litigation which indicated that Ecclestone controlled Bambino? This question seems to be the big hurdle in the case against him.

Perhaps it could be said that Gribkowsky only became self-interested once he received the payment which was after the litigation. However, Constantin believes that the payment was a bribe so if this is true, clearly Gribkowsky was the kind of person who had personal gain in mind. If this is the case then it would not be hard to imagine him withholding evidence from BayernLB in order to use it later for personal gain.