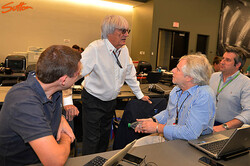 Last week Pitpass featured an article about an allegation in the High Court trial against Formula One boss Bernie Ecclestone which is currently going on in London. The allegation in question was that in 2001 a subsidiary of Ecclestone's Bambino family trust had given payments of £6.2m ($10m) to the owners of four teams in return for them committing to stay in F1 by signing the 1998 Concorde Agreement. In our article we urged for caution in describing the payments as bribes and we concluded that "the upshot for writers and editors is that the devil (or perhaps an angry billionaire) is in the detail."

It seems our appeal for prudence fell on deaf ears as yesterday's round of media coverage hasn't just attracted attention from Pitpass but also from Ecclestone's lawyers.

Since the trial began on 29 October it has covered a wide range of ground from the payments to the teams to Ecclestone's memory and his relationship with colleagues. The trial has yielded very little news which is relevant to the sport or business of F1 in the present day. The payments to the teams highlight this point as they relate to events which took place well over a decade ago. There is good reason why the content of the court case is firmly focused on the past.

The lawsuit has been brought by German media rights firm Constantin Medien. It is a former shareholder in F1 and in 2003 Constantin sold a 16.7% in the sport to German bank BayernLB for £7.3m (€8.5m). It was an incredibly low price and it came with a catch.

BayernLB already had shares in F1 and this deal gave the bank a total of 47.2% of the sport. Constantin agreed to sell its shares for such a low amount on condition that it would get 10% of the proceeds if BayernLB sold its 47.2% stake for more than £700m ($1.1bn). It was sold in 2006 to private equity firm CVC which is now F1's largest shareholder. Although CVC offered the highest bid, it paid £508.3m ($814m) to BayernLB so Constantin did not share in the proceeds.

Constantin's lawsuit claims that Ecclestone and Bambino paid a £27.5m ($44m) bribe to BayernLB's former chief risk officer Gerhard Gribkowsky to ensure that he sold the 47.2% stake to CVC. Constantin says that CVC was Ecclestone's preferred buyer for the stake as it had agreed to retain him as F1's boss. In 2011 Gribkowsky was arrested for receiving the alleged bribe and in June last year he was found guilty of this and was sentenced to eight and a half years in prison in Germany. His arrest led to Constantin filing its lawsuit which is against Ecclestone, Gribkowsky, Bambino and the trust's former lawyer Stephen Mullens.

In order to win its case Constantin doesn't just have to demonstrate that a bribe was paid but that this led to F1 being undervalued and therefore to it losing out on its share of the proceeds. Perhaps surprisingly, a great deal of its evidence is in media reports. Witnesses have been repeatedly asked if they agree with or remember events described in newspaper, magazine or website articles which are sourced from a wide range of outlets.

One outlet frequently referred to is the website worldcarfans.com which is a bizarre choice as it is not known for its F1 coverage. Another equally unusual but often-named source is Atlas F1 - a website brand which was discontinued more than five years ago. The fact that events in the case were reported on Atlas F1 is another reminder that the details are far from relevant to the sport today. Given how long it has been since the Atlas F1 brand was dropped it is no surprise that it has lost currency within the industry.

On 5 November the judge Mr Justice Newey asked F1's chief financial officer Duncan Llowarch "do you have any kind of press cuttings service within the organisation?" Llowarch responded "We do, yes. Although it tends to be focused on the UK press." One of Constantin's QCs David Blayney then followed this up by asking for the name of the press cuttings service and saying "is it Atlas?" Llowarch replied "that's not a name I recognise. Precise Media are the people who do it for us."

More recently, when Mullens was giving evidence another Constantin QC Philip Marshall directed him to "an article from the Atlas F1 News Service" and asked "is this something you subscribe to?" Again the answer was of course "no." Even when Mr Marshall referred to a current publication he didn't have any luck. He asked Mullens "isn't it right that you would have been able to also obtain media coverage in Autosport, for example, which is, as I understand it, linked to Atlas F1?" However Mullens replied "No, I've never read Autosport. I'm not really very interested in cars."

Relying on old media reports may seem strange but in fact it is a deliberate part of Constantin's strategy. Ecclestone, Bambino and Mullens claim that they did not even know that Constantin had an agreement with BayernLB to get 10% of the proceeds from the sale of its stake. If this is the case then it would be hard for Constantin to demonstrate that the defendants acted deliberately against it.

To try and show that the defendants did know about Constantin's agreement it has come up with old media coverage about it and asked if they had seen it when it was published. The response is always the same - as Mullens said: "I didn't see that and it wasn't brought to my attention. I had no knowledge of these rights until this litigation was commenced."

Another of Constantin's strategies revolves around evidence given by Gribkowsky in court last year. Near to the end of Gribkowsky's trial he was told by the judge that if he confessed he would be given a sentence of between 7 years and 10 months and 9 years. Gribkowsky proceeded to confess to receiving a bribe and was given a sentence within this range. Ecclestone, Bambino and Mullens claim that Gribkowsky fabricated the confession over fear that if he had not done this he would have been found guilty anyway and would have got a longer sentence.

Accordingly, Ecclestone, Mullens and Bambino dispute the details of Gribkowsky's testimony whilst Constantin wants to demonstrate that it is accurate as he admits to receiving a bribe. This brings us back to yesterday's media coverage.