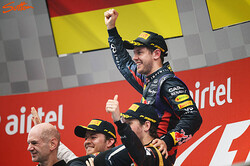 While we know we cannot rely on the weather gods to spice things up today, not unless the circuit is suddenly shrouded in smog at half-distance, we do know that tyre strategy is going to be key.

Whilst the option tyres are clearly quicker, they drop off after just a couple of laps and consequently nobody really wants to be on them today. With this is mind we saw the strategy begin to come into play yesterday and, as one might expect, some have already got it wrong.

The biggest casualty in qualifying was Romain Grosjean, his team's gamble on a single run on options totally backfiring and leaving the Frenchman starting from seventeenth on the grid.

Elsewhere we saw Red Bull and Ferrari put their drivers on different strategies, a gamble that will either pay off or fail over the next ninety minutes.

Ever the gamblers when it comes to tyre strategy, McLaren has both its drivers on the prime rubber, as the Woking outfit seeks to maintain its advantage over Force India.

According to Pirelli, two stops is theoretically the quickest approach to the 60-lap race, but this very much depends on the car and other race factors, such as traffic.

On the two previous occasions on which the race has been held the Safety Car has not made an appearance, nor have there been any serious incidents, even on the first lap. While there have been minor incidents in T1 it is T3 that is regarded as the corner most likely to see a pile-up but that too has been pretty much incident free in the last two years.

An incident early in this year's event could turn all that tyre strategy stuff on its head, for the early appearance of the Safety Car would allow Vettel and others to shed their options and get on with the race.

While a number of drivers are out of position, Vettel must be hoping that Grosjean - who starts behind Vergne, Bottas and Gutierrez - gets up to his old ways.

By the way, and we don't want to depress you, but not only has Vettel won both previous races he has led every single lap.

While most concentrate on the title(s) which should be wrapped up today, it is the battle(s) behind that we should really be focussing on.

The Constructors' Championship is not only about money it is about prestige, and Ferrari faces the real prospect of finishing behind Mercedes and Lotus in this year's title fight, while, having leapfrogged Toro Rosso, the ever improving Sauber has its eyes set on Force Indi and possibly even McLaren.

Ron Dennis famously said that to finish second was to be the first of the losers however, a number of drivers out there today will be happy to finish fourth, fifth or sixth, what with only a handful of seats for 2014 actually filled.

With three more races remaining this is the time when drivers can stake their claims on those all important seats... or blow their chances entirely.

In a late move, and with its eye clearly on safety, Pirelli has called on the teams to limit its running on its tyres today, asking them not to run more than 15 laps on the options and 35 on the primes. A sort of strategy by proxy, enforcing teams to pit and also punishing those teams able to extract more from their rubber.

Thankfully the FIA does not agree with the move and is not changing the rules.

Of course, on a similar strategy to Alonso, and starting a couple of spots before him, Mark Webber could do much to aid his Red Bull teammate's title bid today... but honestly...

While Vettel has an ominous record here and has topped the timesheets in every session, one cannot help but feel that teammate Webber looks remarkably confident. Then again, he has before.

With Grosjean so far back, Raikkonen has the chance to re-take the spotlight coming off the back of his podium finishes in Singapore and Korea.