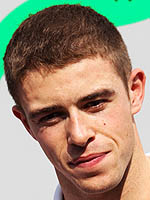 While most are eyeing the vacancy at Red Bull following Mark Webber's retirement, Paul di Resta admits that it is another team that has his heart racing.

Still smarting from the fact that he wasn't recruited by one of the big teams last year, the Scot is making a good impression with a revived Force India this season. Although his idea of team work leaves a lot to be desired, in recent races he has referred to the team as "they", on track, where it really matters, he is once again attracting attention.

With Webber heading off to Porsche, there is no end of drivers queuing to take the Australian's place alongside Sebastian Vettel, however, di Resta would be happier to receive a call from Maranello than Milton Keynes.

"It’s every boy's dream as they grow up to get in a Ferrari at some point in their life," he told the Scotsman, "and being Italian is a nice thing, having the Italian blood.

"But I will concentrate on my job and let other people do their job," he continued. "Where I am next year I don't know, but there are many points up for grabs. That is the important bit - keeping your reputation high."

A Mercedes man, it appears that the Scot is not on the Red Bull radar, though he hasn't entirely given up.

"There's nothing I can do. It is what it is. I'm only trying to do what I can do. I've built my reputation in Formula One. I want to be in a winning seat, but it's down to the decision of the boards of other teams."

Felipe Massa, the current incumbent of the second seat at Ferrari, following a strong start to the season which actually saw him begin to overshadow his illustrious teammate, has dropped off in recent races, not helped by three crashes over as many GP weekends. It is widely believed that this will be the Brazilian's final season at Maranello, with most thinking either Bianchi or Hulkenberg to be in line to replace him.