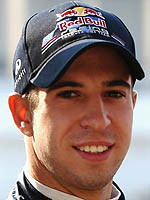 Da Costa (right) will be at the wheel for the first two days of the test, with Sainz completing the team’s running at the Northamptonshire circuit on day three.

No stranger to F1 machinery, Portuguese racer Felix da Costa took part in last year’s Young Driver Test at Yas Marina, where he put Red Bull on top of the timesheet on his second day. Earlier this season, he filled the role of reserve driver for the team, while regular reserve Sebastien Buemi was on duty at other series (he was racing at the World Endurance Championships during the Chinese Grand Prix and Le Mans testing during the Canadian Grand Prix).

Carlos Sainz Jr had a busy schedule across several F3 categories last season and this year the 18-year-old is contesting his first GP3 campaign with the MW Arden team. He recently scored his first podium finish in the series with third place in Race 2 in Valencia. He currently lies sixth in the drivers’ standings after four races of the 16-race season.