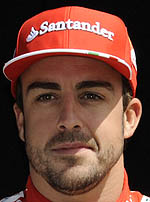 Stefano Domenicali: "We came to Silverstone with considerably different expectations in terms of performance to those we demonstrated this weekend and now our main objective is to immediately get an understanding of why we are in this situation. If we want to continue to fight for the championship, it is vital that we improve the car, because in performance terms, our rivals have made a further step forward. Today, the points table matches the target we had set ourselves, which was to reduce the gap before the summer break. Both Fernando and Felipe drove amazing races and the team was able to manage the tyre problems in the best way possible. Now, there is little time to react and we can expect a busy few days in the run up to the German Grand Prix and we must use these days to look ahead, working calmly and steadily to find the answers to the questions that have been thrown up by this weekend."

Fernando Alonso: "If I'd been told this morning that I would have ended up on the podium, I would not have believed it possible. Yesterday in qualifying, we finished a long way down and our expectations for this race were to aim for a fifth or sixth place, hoping to score as many points as possible. After some negative experiences, today we can say we were lucky on a few occasions, beginning with Perez and then at the first stop with a completely worn out tyre – fortunately at the last corner – and then with Vettel's retirement. At the end of a difficult weekend, it was unimaginable that we could make up so much ground, but now we must try and improve, starting with the very next race in Germany. Only there will we understand if we have indeed slipped backwards or if this weekend was a one-off. Up until the Canadian Grand Prix we saw a Ferrari capable of fighting for the podium, but one that struggled a bit in qualifying, before then having a great race pace, so now the aim is to get back to that situation. It's impossible to say what happened to the tyres and that's something the experts will have to clear up."

Felipe Massa: "I am very pleased with my race which this time was truly impeccable. After a fantastic start and a perfect first lap, maybe one of the best of my career, I managed to drive an attacking first stint. On lap 10, when I was right in the middle of the corner at Turn 5, my left rear tyre failed and I had to pit. After this forced stop, I found myself last and from then on, I began a great charge up the order, thanks to a lot of very nice passing moves. Without that tyre problem I could have made it to the podium, because today I had a good feeling with the car and both myself and Fernando had shown we could fight with those at the front. Now, our greatest concern revolves around safety, because even if I can't really tell what happened today, it's unacceptable having to drive knowing you are not safe. Even if, luckily, nothing serious happened, what we saw is very dangerous. I already had this problem twice before in Bahrain and if something isn't done about it as soon as possible, I am sure it will happen again. In a few days we will be at the Nürburgring, a track I like a lot and where I hope to have a car that is more competitive in qualifying, so that I can start further forward, which would allow me to have another strong race."

Pat Fry: "It was a spectacular race, but not an easy one to manage, because the two Safety Car periods and the problems concerning the tyres made the job on the pit wall very complicated. In order to try and prevent any possible tyre failure we made a few changes, aimed mainly at managing the pressures and we tried to give the drivers advice on how to deal with the difficult situation. With Fernando, we were a bit lucky, whereas with Felipe we were not, but we can still take satisfaction from how we read the race, because the performance of both F138s improved compared to what we saw on Friday and Saturday. In the short time we have before the next race in Germany, we will try and work methodically on all aspects that could help us improve our performance, trying to find the right compromise between qualifying and the race, because, as we saw today, the points are only given out on Sunday."