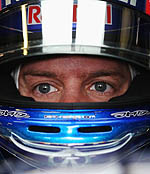 Sebastian Vettel: "We will see what happens tomorrow. It's a long race, but I'm happy with today. Either Lewis found a short cut or he has something special round here, it was a phenomenal lap and he wasn't in reach today. I was very happy with the lap I did at the end, it was very close with Mark also. We did what we could for the team and it's always nice to position well in qualifying, especially around here – qualifying is good fun and I'm enjoying the high speed corners. We'll see how we get on with the tyres tomorrow and with looking after them. I'm happy for the team today, our factory is very close to this track, so I'm looking forward to tomorrow."

Mark Webber: "We were up against it to get on the front row against the Mercs, they're on another level as they have been for the last few events. It was disappointing to get pipped by Seb there at the end by a hundredth, it was very close. I was happy with the first part of my lap, but I could have done better in the last sector. We have a good balance for qualifying and race pace in terms of where we prioritised things. It should be an interesting race, we can get a good result from there."

Christian Horner: "We could see this morning that Mercedes were very fast over a single lap and they've demonstrated that again this afternoon, so congratulations to Lewis on his pole position at Silverstone. It was a great performance from both of our drivers with only one hundredth of a second separating them on the second row. Hopefully we can give Mercedes a good run for their money tomorrow from there, and I'm sure it's going to be an exciting British Grand Prix".

Thierry Salvi, Renault: "Silverstone is one of the hardest circuits on the engines, with some of the fastest series of corners we see all year and one of the highest average speeds, but also some of the tightest complexes. As a result, getting the maps correct is always a compromise, but we were on the right side today. While it would have been great to get a front row start at the team's home race, we did the best we could. We're still in a good position to let the race come to us and hopefully we can win for the fourth time in five years."