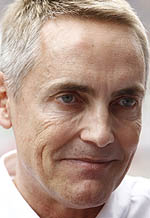 McLaren boss Martin Whitmarsh claims that F1 is facing a crisis, warning that as many as seven of the current teams could run into financial difficulties serious enough to drive them out of the sport.

As well as the huge hike in engine costs as the sport prepares for one of its biggest overhauls in living memory, the Englishman, who is also chairman of the teams' alliance, the Formula One Teams' Association, cites the rise in entry fees claimed by the FIA and the return of in-season testing.

Meanwhile, as the sport prepares to be floated on the Singapore Stock Exchange, Force India boss, Bob Fernley, claims that (current owners) CVC are the worst thing to happen to F1 in terms of the money they take out of the sport.

"Formula One works best in a crisis but it is a shame that we have to create a crisis to deal with," Whitmarsh told the Guardian. "This sport needs 10 or 11 teams and we should fight to keep the 11 teams we have now. But we are not good at doing these things. We seem to drop the ball. I fear that we will have a crisis and then we will have to get real and sort it out.

Referring to the seven teams he fears might not survive, he added: "I cannot see in their shoes how you can construct a sustainable business model."

While CVC is due to increase the financial pot shared by the teams from 47.5% to 60%, Whitmarsh is fearful that it is the 'big four' - Ferrari, Red Bull, Mercedes and his own McLaren - who will reap the majority of the benefit, leaving their seven rivals to struggle. It's a fear shared by Fernley.

"There should be a more equitable distribution," he said. "It's quite right that Ferrari, McLaren and Mercedes get recognition. I would like to see Red Bull recognised in 20 years' time but not after five years of pumping money into the sport."

With engine costs due to rise significantly, Whitmarsh, who recently announced a new engine deal with Honda from 2015 which means the Woking team gets its engines for 'free' once again, cited the lack of leadership from the FIA.

"What is frightening is that we have adopted important new engine regulations. They are the right thing to do in many regards. They are technologically interesting and relevant to society. But F1 badly mismanaged the cost of the development and supply of those new power plants. We allowed the engineers to be unfettered in dreaming up the regulations, which means teams are now facing big bills. We got costs down to £10m and now we are talking about double that. That is with all the other cost challenges we have.

"In addition, under a new agreement, the teams will to pay Pirelli £70m ($105m) over the (next) seven years." revealed Whitmarsh.

"Everything we're doing at the moment is about increasing costs," added Fernley. "There is no initiative at all about reducing costs. If we don't sit down and address it very carefully we're going to lose teams.

"I think all teams are struggling," he continued. "You would be surprised by how high up they are. We should never underestimate the resolve of Formula One teams. But it will be tougher and tougher.

"If we do in-season testing that will be a massive increase. But look at our basic operations. Do we really need to be running wind tunnels 24/7?"

Other than weak leadership from the sport's powers that be, not to mention the self-interest of certain teams, Fernley is in no doubt where much of the blame lies. "I think CVC have done an absolutely awful job, "he said. "In my view they are the worst thing that has ever happened to Formula One."

While CVC refused to comment, an FIA spokesperson subsequently told the Guardian: "The FIA has supported the resource restriction agreement but that failed because the teams could not agree. The FIA would still like to help teams to cut their costs. However, it cannot intervene in the discussion on the costs of the new engines. That is between the constructors and their customers. On entry fees, any organisation charges a fee that helps pay for the event. Entry fees had not risen in a long time and they have been revised to keep pace."