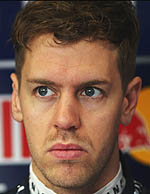 Sebastian Vettel has let rip in a scathing attack on tyre supplier Pirelli. Following on from the Spanish Grand Prix in Spain two weeks ago there have been vocal concerns that Formula One has become dominated by tyre management rather than racing ability.

While Pirelli has revealed it intends to change the construction of its tyres in time for the Canadian Grand Prix, Vettel's comments went a step further.

"We saw that people suffered with their tyres, the surface, the tread delaminating and blowing up," said the reigning world champion. "Fortunately nothing happened but it's not because drivers drove over debris, it's because the tyre's simply not good enough, and that can't be safe."

A number of failures in recent races have been attributed to cars running over debris on the circuit, causing them to overheat. The net result, according to Pirelli, was the tread coming off the carcass as it failed. However, Vettel's comments suggest he does not believe that to be the case, implying Pirelli is using it as an excuse for the media.

Initially it was suggested Pirelli had asked to revert to the 2012 compounds, a notion dismissed by Paul Hembery when contacted by Pitpass.

"To make a change we would need the universal agreement of the teams," he explained. "If not we would have to go to FIA and force a change on the basis of general safety .

"We are still defining (the) final changes but it looks more likely to be a 2013 tyre with one modification."