Whitmarsh We should have stuck with 2012 car 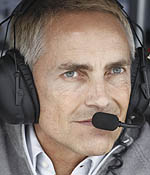 After five races Martin Whitmarsh has run the white flag up the McLaren flagpole, confirming the Woking squad would have been better off sticking with last year's car.

McLaren took the decision to change tack for the 2013 season, creating a substantially different car while rivals evolved their existing designs. It was a risk, the team admitted at the time, but a calculated one.

Having had arguably the fastest car on the grid for much of 2012 the team’s logic followed that the car had all but achieved its developmental zenith – there was precious little left to find, and a long year ahead. As such there was greater opportunity in creating an all-new, equally fast car and spending 2013 teasing more speed from it.

Of course the plan soon ran in to trouble. When the MP4-28 began testing the pace clearly wasn't there, though the team hid any concern from the press. It was only in Australia, in full view of the watching world, that the scale of the problems McLaren would face this year became apparent. It was there that the squad's collective shoulders dropped, and it's fair to say that after five races they've not moved.

"Frankly, the car is not fast enough," Martin Whitmarsh admitted to the official F1 website. "With the benefit of hindsight we were too ambitious last year. We had a competitive car and made decisions to make very big changes in the expectation of aggressively making a big step forward – and that backfired."

There was talk at the first race that the team could revert to its 2012 car, a sign of how deep McLaren's woes ran, though that notion was soon dispelled. The MP4-27 has not passed the latest crash tests and besides, who's to say that would fare any better against rivals who have themselves moved forward.

With dramatic rule changes set for next year there seems little point in developing the current car if it fails to produce returns. Already the championship appears out of reach, and save stealing a race win late in the year, 2013 looks a write off. Moving resources to the new car early will be an enticing option as clinging to hope for too long risks producing a similarly uncompetitive car next year.

Even then the light appears a long way down the tunnel. In 2015 the squad switches to Honda power, and while the Japanese company will make every effort to be competitive from day one it is fair to expect at least some teething problems.

It could be 2016 before McLaren returns to the level we would expect of it, a notion Whitmarsh is perhaps choosing not to think about.
"I think teams go through these phases," he reasoned. "We are a long-term team.

"We have fiscal stability, we've got a good budget and we have a great new partner in prospect – so there are a lot of things to be positive about as there are a number of teams here who struggle to survive. So yes, we are having a tough time, but we've been there before. We will fight through and do the best job we can."