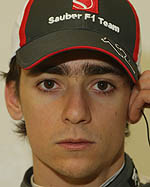 Esteban Gutierrez has been handed a grid penalty for next weekend's Bahrain Grand Prix.

The Mexican is one of many under investigation by Race Stewards in China, the Sauber driver for the incident in Turn 14 which eliminated both himself and Adrian Sutil from the race.

The Stewards, having received a report from the Race Director and having heard from Gutierrez and a Sauber team representative, and having examined video evidence, determined that in colliding with Sutil, Gutierrez had breached Article 16.1 of the FIA Formula One Sporting Regulations.

The Mexican, who admitted he had misjudged the closing speed on Sutil, will forfeit 5 grid places next week in Bahrain.