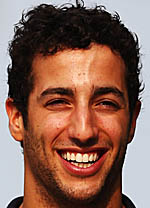 Daniel Ricciardo will start tomorrow's Chinese Grand Prix from seventh place. The Toro Rosso driver made it into the final phase of qualifying for the first time in almost a year, also benefitting from the fact that neither Sebastian Vettel nor Nico Hulkenberg set a time in the final ten-minute segment.

A lack of running dominated the opening minutes of the final session, drivers and teams conserving rubber ahead of what is expected to be a tyre-dominated race thanks to the high wear experienced during practice.

By failing to set a lap time both Vettel and Hulkenberg have free choice of tyre, while Ricciardo will be forced to start on the scrubbed soft tyres he set his fastest lap on.

"I definitely wanted to try and post a time," he explained of his decision to set a time in the final segment of the session. "If we'd been ninth or tenth it'd be a question mark, but to get seventh was really good for us.

"Today we had to go for it. I think we surprised a few people and surprised ourselves."

He did indeed, told over his radio that Ricciardo had made it through to Q3, Jenson button simply said "wow!"

Last time Ricciardo qualified inside the top ten, at last year's Bahrain Grand Prix, his race was rather anti-climactic. Slow in the early part of the race he eventually trailed home behind teammate Jean-Eric Vergne who'd started thirteen places behind Ricciardo, in fifteenth place.

"It's been nearly a year since then and I've had plenty of time to reflect," the 23-year-old confessed. "It's something I have in the back of my mind.

"I've been hanging out to get another Q3; another chance to fix everything I didn't do that day," he added. "I never repeated it last year so I definitely learned from it. It was a hard but good lesson."

However despite his seventh place on the grid Ricciardo realises his Toro Rosso is probably no match for those around him, he can therefore expect to slip down the order somewhat.

"I'm going to target the guys around me and the guys in front," he said. "All the cars in front should be quicker, but if I can try and stay with them by the end it won't be too bad for us."

Vergne meanwhile set the sixteenth fastest time and was eliminated during the second phase of qualifying. The Frenchman however will line up fifteenth thanks to Mark Webber's rear-of-grid penalty for stopping on track mid-way through the session.