Webber to start from back of grid 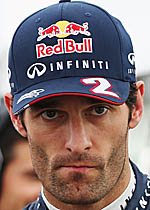 Mark Webber's season has gone from bad to worse as race stewards rule that he will start the Chinese Grand Prix from the back of the grid.

The Australian, having not posted a time good enough to guarantee him progress to Q3 was sent out by his team for a second run. Indeed, only Lewis Hamilton, Nico Rosberg and Kimi Raikkonen didn't go out for a second run.

Having gone second with a 36.679, Webber subsequently stopped out on track (at Turn 14), appearing to have run out of fuel. A message from the pits subsequently confirmed that a problem with a fuel bowser meant he had been short fuelled.

The Stewards, having received a report from the Technical Delegate and having heard from a Red Bull representative, subsequently determined a breach of Article 6.6.2 of the FIA Formula One Technical Regulations, in that Webber was not able to return to the pits under the car's own power and was unable provide a fuel sample as required.

As a result he is excluded from the results of the Qualifying Session but will be allowed to start the race from the back of the grid.