Webber to start from the pitlane 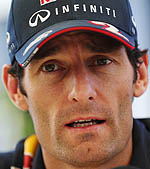 Having been excluded from qualifying and banished to the back of the grid, Mark Webber will now start the Chinese Grand Prix from the pitlane.

The move follows Red Bull's decision to turn the Australian's exclusion to his advantage, breaking Parc Ferme rules by making a host of changes to his car including changing the gear ratios, suspension set-up, the rear wing assembly and even the fuel pump.

Webber, who was excluded after his car ran out of fuel in Q2 and was left stranded on track unable to provide the requisite fuel sample for officials, was originally looking to start from fourteenth. However, after the race stewards investigation he was excluded from qualifying and banished to the back of the grid.

With the Australian having described today's start as a "bit WWF", a reference to the uncertainty, manipulation and madness of Wrestling, Red Bull is seeking the best chance of aiding Webber to turn his race around.

With many fans already unhappy that F1 is now becoming too strategic, Webber best summed up one of the main problems facing the sport when he said: "If you race people, then you're in trouble. So just don't race; put the tyre on and don't race anyone. Just try and get home."