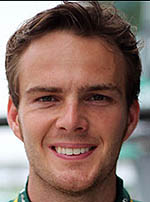 Ma Qing Hua: "It was a very proud moment for me to be the first Chinese driver to take part in an F1 session in my home country, but to be honest I was focusing on doing my job and I'm pleased with how it went. I want to thane Caterham for this chance and for helping make me so comfortable in the car and all weekend.

"We did 20 laps and my times kept coming down as I was more and more comfortable with the car. It felt like we had a slight issue towards the end of the session that cut the fourth run short but after a few checks it looked like a sensor problem so I was able to finish the session with a car that felt good with the final changes we made.

"I've learnt a lot this weekend already and that was the main thing in FP1 - make sure I completed the run plan and don't push too hard so I could learn as much as possible. Cyril Abiteboul told me he was happy with my performance at the end of the session so I'm really pleased with how it went."

Charles Pic: "I sat out FP1 for Ma and was then back in for FP2. It didn't start all that well as it felt like I had a hydraulics problem early on the first run but we took a look at it in the garage and managed to sort it out pretty quickly. However, that problem did mean we lost enough time to miss one of the runs and that was important for giving us enough options on car setup. Despite that we got on with the normal program, running a couple of setup options on the medium tyres, then onto the performance run on the softs and finishing with a long run on the softs to see how they hold up over a longer distance. The quickest lap times seem to be on the first lap on the softs but I didn't have a clean lap on my fastest run and that hit my time, but we've completed a lot of mileage today and have a couple of setup options to look at for tomorrow so we'll look for areas to improve tonight and hopefully we can push on tomorrow."

Giedo van der Garde: "Both practice sessions for me were ok but we've had issues all day that have held us back a bit. This morning we had a KERS issue that meant we were running without KERS for the whole session, and that obviously didn't help, and then in the afternoon I overcooked it going into turn one on one of the medium sets and that meant we had to cut short the FP2 plan so we didn't use up another set of tyres. Despite that we have a lot of good data on the medium tyres from both sessions and the performance run on the softs went ok. Degradation levels are going to be big here, particularly on the softs which had pretty much gone by the end of the long run we did on them, so we'll have to look closely at how we deal with that on Sunday.

"We know this isn't going to be a particularly easy weekend for us but I still think we can fight tomorrow and on Sunday. The atmosphere in the team is good and if we can repeat the sort of race performance we had on Sunday in Malaysia we'll be ok."