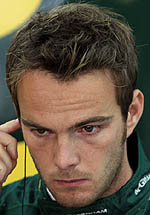 Charles Pic: "Sometimes qualifying goes like it did today. We obviously didn't finish where we wanted to but for much of the session we looked pretty good, especially halfway through the session when we were putting in pretty good times.

"We made the call to switch to inters with about five minutes left of the session and for the first lap it was very tricky - there was a lot of standing water and it was hard to keep the car on track, but it improved pretty quickly and I was starting to push before I touched the white line which caused me to spin and I made contact with the barrier which meant I had to pit. Until that point I was much faster but didn't have the luck you sometimes need.

"Our pace was good in the conditions today, similar to a number of cars ahead, but it's obviously important to finish our fastest laps - today we didn't do that but that speed gives us reason to be positive."

Giedo van der Garde: "Honestly I'm disappointed with where we ended up today as we could definitely have finished higher. We made quite a few changes to the car overnight and it felt much better in FP3 so I was feeling good about qualifying.

"The delays at the start of quali obviously weren't ideal but I was very calm and looking forward to getting out there. It was obviously the same conditions for everybody and it was very tricky out there - I hit a puddle on my first run and span off which meant I had to pit for a new nose, but the boys did a good job to get me out again quickly and we were looking good.

"With a few minutes left in Q1 we switched to inters and the car felt great. On my last run I was well up but I had to back off for double yellow flags and that was the end of my chance. It's a shame as I know we'd have finished higher, but sometimes it's like that.

"Now we have some more work to do to prepare for the race. Starting where we are we just have to make sure we can avoid any problems at the start and concentrate on getting to the end of what will be my first Grand Prix. If it's raining again at least we know what the track's going to be like so I'm looking forward to it."