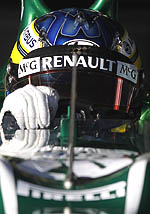 Charles Pic: "That wasn't too bad a race for us. Of course we'd prefer to finish higher but I think that at this stage of the season this reflects our current performance levels.

"We started on the supersofts and our pace was ok for the first stint but the tyres dropped off very quickly. In contrast, when we went onto the mediums the degradation levels were very good so we were able to push the second stint much longer than we'd planned and that gave us a chance to fight. Unfortunately towards the end of the race we had a KERS failure which obviously cut our outright pace and prevented us from taking full advantage of the good tyre wear we saw on the primes.

"We know that it's going to be similar to this for the first few races, but with what we have coming it's going to be a really interesting season. We have quite a few small details we need to work on for the next race but it's good to have a real fight on our hands, good for the team and the fans so let's see how this progresses."

Giedo van der Garde: "For me that was a reasonable start to my F1 career. It was really important to finish my first race and that's exactly what I did so I'm pretty happy with how it ended up.

"I started the race on the supersofts, passed a few people in the first turn and was keeping up with Bianchi until the first pitstop, even with the deg levels on the option tyres. Unfortunately I had a slow puncture on the first set of mediums and that cost me time and position. We had to stop much earlier than planned to put a new set of mediums on and that meant a change to the strategy, but it's all good experience for me.

"I've said all through pre-season that the first races are a chance for me to learn and today was really good for that. I feel good physically and now we have a lot more information about tyre wear and how to manage that so we'll take that to next week's race Malaysia and see what we can do at our first home race of the season."