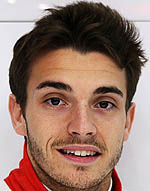 Jules Bianchi enjoyed another strong and seamless race to finish today's 2013 Formula 1 Petronas Malaysia Grand Prix in 13th place. He didn't put a put a foot wrong throughout an arduous 56 lap tour of the Sepang International Circuit in fierce heat and humidity and continues to showcase the developing strength of the MR02.

Both drivers got difficult starts today which compromised the early part of their race. Max came off worse on the opening lap and then queuing for the first pitstop dropped him back further. He did well to post strong lap times periodically through the race to show his potential, but unfortunately he hit the blue flag period much earlier which affected his ability to fight consistently well through the stints.

Jules Bianchi: Obviously I'm delighted to finish 13th today, after 15th in my first race last weekend. I hope this is a trend we can continue! It was not an easy day though as we made life more difficult with a not so good start and opening lap and this really hurt the first part of my race. The lap time was really coming towards the end of the first stint but I was stuck behind the Caterham and unable to do much with it. After 18 laps or so I was able to get back into position and from then on I was very happy with my progress. It was nice to have held off Maldonado and to maintain the gap for so long. This shows we have the car to fight with them in the future. There are some things to learn from and improve after today and the weekend generally, but we have also made more progress already since Melbourne and we need to keep pushing. My thanks to the Team for a lot of hard work and more to come between now and China.

Max Chilton: I'm slightly disappointed with today because it seemed so many things were against us. First, the start didn't work well and I lost a lot of time on the opening lap. That setback and being stuck behind the Caterhams really defined my race, which is tough to take because you know instinctively that the blue flag period is going to come much sooner in the race. The car performance is there and so is my pace, but there's some work to do to bring all of that together and maximise every part of the race, including how we manage the blue flag phase. I'm sure that focus will ensure we can come back stronger in China. A good job by the Team this weekend as it has not been an easy time.

John Booth, Team Principal: As is typically the case, the Malaysia Grand Prix delivered its unique mix of challenges for us to contend with today. The shower we had before the pitlane opened certainly produced some tricky conditions on the way to the grid and there were a few nervewracking moments once we got there in terms of tyre decision, particularly as both drivers had been aquaplaning in Turn 3. We didn't enjoy the best of starts and opening laps, however Jules did a good job to stay with the Caterham ahead. Once we had moved to dry tyres we were unfortunately stuck again behind Van Der Garde, however some good strategy from the engineers and pitstops from the mechanics allowed him to break free with effect from the second stint and make better progress whilst looking to the gap to the cars in front, which had been compounded by being held up for so long. For the rest of the race we were looking like we were going to enjoy a good battle with Maldonado until he unfortunately retired, which left Jules in a free air gap to endure a lonely stint. He did a great job once again and a 13th place is most welcome at this stage of the season. Max unfortunately came out worst on the opening lap and also had to queue in the first pitstop, which lost him time. At various times he showed he had the pace to beat both Caterhams but unfortunately he hit the blue flags earlier and then at the end he was held up by Ricciardo a lap ahead and lapping slowly in the Toro Rosso. Once again we can be happy with the progress we are making however whilst the midfield is still in striking distance it calls for a big push over the next three weeks with the development of the car. Realistically, we know we need a few more tenths to be able to really race with them.