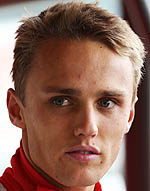 Formula One proved to be a baptism of fire for Marussia's Max Chilton after an early pit stop for a new wing put him on the back foot early in the Australian Grand Prix.

The debutant pitted for the new nose after what he believed was a racing incident unseen by the television cameras. "It was nobody's fault," he explained, having emerged behind the Caterham of Giedo van der Garde. But while Chilton believes he had the edge over the Dutchman the realities of being a Grand Prix backmarker made overtaking rather more than a formality.

"It's quite frustrating to know you've just worked (for) five laps to catch a car up, and then before you know it he's pulled the distance on you having to let the (leaders) through," he moaned. "Every time I'd catch him we got the blue flags and that kind of took a lot of the race up."

It was only in the closing stages, once clear of Van der Garde, that Chilton believes he demonstrated his worth as a Formula One driver. "At the end when I had the open road I had the speed," he claims. "In the last ten laps I pulled away and then had the pace of the guys in front."

However, the reality is that managing blue flags is a pre-requisite when driving for Marussia. It's an area of weakness for Chilton, and one the 21-year-old knows he needs to improve. "It's my first race; you're not going to get the best but I tried my best," he said. "We'll see what it's like in Malaysia."

Chilton eventually raced home in seventeenth, two places behind teammate Jules Bianchi, who for many was one of the true revelations of the Melbourne weekend.