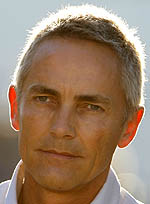 The dumping of Timo Glock in favour of Brazilian hopeful Luiz Razia has once again raised the question of pay drivers, and McLaren's Martin Whitmarsh, for one, feels it sends out the wrong message.

Whilst it is highly unlikely that you could turn up at any of the world's major sports clubs and buy your way into a place on the team, the same cannot be said of Formula One.

The so-called pinnacle of motorsport has a history of saying 'that will do nicely' to hopefuls armed with the necessary funding indeed, some pay drivers have gone on to achieve great success.

This year, whilst there are five world champions on the grid, there will be five rookies and a further five with less than two seasons under their belts. A number of the drivers who will line up on the grid in Melbourne are not there because of talent but because of the financial backing they bring.

With HRT having fallen by the way side, and a question mark hanging over several more teams, little wonder that some are seeking dosh over talent however, McLaren boss Martin Whitmarsh feels this sends out a negative message.

"For me it's personally sad that there are so many pay drivers in Formula One," he said, according to Reuters, "the numbers have crept up.

"You would hope that in the premier form of motor racing worldwide, you wouldn't have to have pay drivers," he continued, "the reason that some of those guys are pay drivers is that actually they are fundamentally not good enough to be in Formula One.

"But I think it's difficult for us in Formula One to say to some of these teams 'you can't have pay drivers' because sadly they have become an important constituent of their budgets," he admitted.

Much like football, where the spending of the wealthier clubs is having a catastrophic effect on those lower down the league, and even the game itself, some Formula One teams, despite the Resource Restriction Agreement (RRA), are creating an ever widening chasm into which more team will fall.

"We are affected by the cycles of the economy of the world, we can't ignore that," Ross Brawn told reporters earlier in the week, without a hint of irony. "It is a constant battle, we can never rest and say that it's okay. we are always going to be working to contain costs and improve the quality of Formula One and make it more appealing to partners and sponsors.

"In the 34 years I've been in Formula One it's never been very different to be honest. There are always one or two teams at the bottom that are perhaps struggling to meet their budgets... but there's still a very strong core to Formula One."