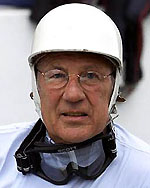 Motor sport great Sir Stirling Moss has criticised the sport's current crop of drivers, suggesting some earn too much while others have too little talent.

"There's no doubt the sport is now far too expensive to get in to unless you have an enormous amount of capital behind you," the four-time world championship runner-up told the Pitpass' podcast.

"They're going to have to make some very strong decisions and agree amongst themselves to stick to them so that it can actually happen," he added, "because if people have got to put the sort of money they do in to a car now… it's becoming unrealistic."

One of the sport's first truly professional drivers, Moss believes part of the solution would be a reassessment of a drivers value as part of wider changes to motor sport's financial structure.

"The money the drivers are paid is unrealistic, really. They're doing their sport, the thing they love to do and I think (they should be paid) a fair wage, but I think they're now, in a way, too high. Then of course the others scratching around have to come with money."

However there is no easy fix, Moss concedes, blaming Formula One's hunger for money for what he believes is a lack of talent at the sports pinnacle.
"The problem is of course that the drivers that bring the money aren't really that good," he opined. "Formula One is always going to be the number one place one wants to be, no doubt because the whole thing is structured around that.

"It's an unfortunate thing that drivers now, if they've got a lot of money, can buy in to a team when they really haven't got the capabilities that they should have to drive a car of the type that they find themselves seated."

You can hear the full interview with Sir Stirling Moss on our podcast, which will be available on Thursday.