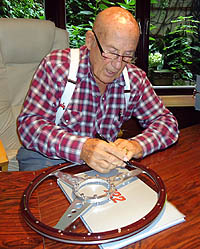 Moss always preferred a three-spoke steering wheel and often asked the manufacturers he drove for to change the wheel. This fabulous full-size, brand new reproduction of his 'wheel of choice' is hand-signed by Sir Stirling and is only available in limited numbers.

This Volanti Classico 15 inch Flat Steering wheel, with a 9 hole moto-lita compatible fitting, comes complete with a clear acrylic stand for display. Complete with Certificate of Authenticity. More details can be found here

For fans of the legendary driver, Memento also has a very limited edition and exclusive book by Sir Stirling, celebrating the Mille Miglia winning 722 Mercedes-Benz 300 SLR driven by him and navigator Denis Jenkinson in 1955. Signed copies are numbered and supplied with a Certificate of Authenticity. Here.

The collectors' book, based on Jenks Mille Miglia report in Motor Sport magazine, is hand signed and numbered and includes many photographs of this legendary race with further written material by Doug Nye. Here.

Then there's a beautiful limited edition print called "The best of British" celebrating the victory by Sir Stirling Moss and Tony Brooks at the 1957 British Grand Prix. (Supplied unframed)

The victory was made Formula One history - The first British winner of a British Grand Prix. The print itself is signed by both Sir Stirling Moss and Tony Brooks. The images in this print show Moss and Brooks on the podium, faces famously muddied, receiving their trophy for the race win, with smaller shots of Moss taking the chequered flag, and the famous driver changeover pit stop underneath. For Formula One enthusiasts and collectors, especially those with a love for all things British, this is one not to be missed. Here.

Coming (almost) up to date, Pitpass regulars will be familiar with the incredible detail that goes into Amalgam's replicas, be they 1:8 cars, 1:1 steering wheels or 1:12 nose cones.

Memento Exclusives has a number of 1:12 scale replicas of the 2011 Red Bull Racing RB7 nosecone & front wing as used by the team to contest the 2011 F1 Championship.

Hand signed by Mark Webber and supplied with a Certificate of Authenticity, the superb, hand built model comes mounted on a base, with a presentation box and is an excellent addition to any collection. More details can be found here.