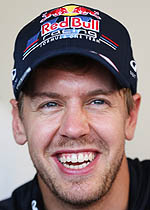 World Champion Red Bull has revealed that its 2013 contender, the RB9, will be unveiled at its Milton Keynes HQ on February 3.

The Austrian outfit, which in 2012 secured its third successive constructors' title, in addition to its third drivers' title for Sebastian Vettel, is the fourth team to confirm the launch date of its 2013 contender, the others being McLaren, Sauber and Force India. Indeed, the February date means that four cars will be unveiled in as many days, with McLaren getting things underway on January 1.

Having retained Mark Webber, albeit on a one-year deal, the Austrian outfit is fielding the same line-up for a fifth season, one of only four teams that hasn't revised its line-up since last year.