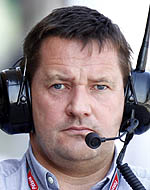 Pirelli has confirmed its desire to continue in Formula One beyond its current contract. Due to expire at the end of this year, Paul Hembery has told Pitpass that the company is ready to submit a formal proposal to the teams after months of preliminary discussions.

Returning to F1 in 2011 as the sole tyre supplier, the Italian company was the subject of heavy criticism before being crediting with helping reinvigorate the sport.

"We hope so," said Hembery when asked if Pirelli intended to continue beyond 2013. "We've had two very exciting seasons and we feel we've contributed our bit to that, which is what we were asked to do. As a company we are interested in going forward."

While outwardly happy with the product and show Pirelli has delivered there are rumblings that some aren't entirely satisfied with the current financial arrangement. Pirelli's deal, which sees teams pay a figure in the region of $3million a year for its rubber, is in contrast to previous supply contracts when many teams received their tyres for free.

Pirelli, which is due to unveil its 2013 rubber on January 23, is understood to have scoffed at the notion it should offer a similar deal. It's believed the teams contribution barely covers the tyre company's logistics, Pirelli's Formula One operation runs at a loss, written off for its marketing benefits.

"We've been discussing, trying to understand what they want, and we're at the point now of making some formal offers," Hembery revealed. "It's a complex situation; you've also got to get the promoter online as well.

"I believe we can do that. If the teams want us to stay, and the conditions remain viable, then we will. That's what we hope to do in the next few months," he added. "Clearly with every company it's not at every cost and any cost but we're willing to go forward and try and maintain our presence in Formula One."

A replacement supplier would not be easy to find should Pirelli pull the pin. It's believed the Italian company has already purchased much of the trackside advertising for 2014, reducing the sport's appeal to any prospective new supplier. Given the difficulty in finding Pirelli ahead of the 2011 season the odds are short that teams will agree and the Italian company will continue its involvement beyond 2013.