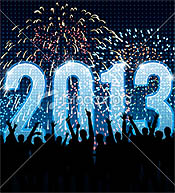 Pitpass would like to wish all its readers a very, very happy and prosperous New Year, and a great season of racing in 2013.

In 2012, we continued to attract new readers, helping us to maintain our position as the leading fully independent Formula One website.

Thanks mainly to Pirelli the opening seven races of the 2012 season saw seven different winners, while the title fight almost went down to the wire.

Hopefully, the coming season will be just as thrilling, for not only is Pirelli aiming to produce some more great rubber; only four teams retain the same driver line-up and while we look forward to the debut of Valtteri Bottas, and Sergio Perez' move to McLaren, surely Lewis Hamilton's switch to Mercedes is bound to be one of the main talking points.

Ahead of what will be our twelfth season of coverage we are hoping that we will be able to give the site an overhaul that will improve it in terms of user friendliness, look and content.

We look forward to bringing you coverage of another great season of F1 in 2013, and hope that you will join us…

As we look forward to the New Year, may we take the opportunity to wish you and yours the very best.