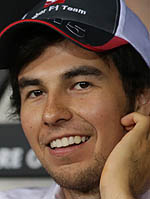 Sergio Perez is determined not only to win a race in his first season for McLaren, the Mexican youngster is targeting the title.

Ahead of every race, far less every season, it's the same old cliched headlines; 'X targets win', 'Y aims for victory, 'Z, this is my year'. Of course, if X, Y and Z weren't aiming for the best result possible it would be bad news for their teams, fans and sponsors. It's a dumb practice but we've grown used to it.

However, in claiming that he aims to win the title in his first season with McLaren, thereby becoming the first driver for the Woking team to do so, Perez is setting himself an almost impossible target.

With his performance having dropped off considerably ever since he was confirmed as Jenson Button's teammate, some are already wondering whether McLaren have made a bad move and will end up needing to replace the youngster during the course of the season. Indeed, Martin Whitmarsh has admitted that joining the multi-champions is going to be a major culture shock for Perez.

Undaunted, the youngster is clear what his target is.

"My target is to win the championship already next year," he told the Daily Mail. "That takes a lot of work during the season, so it's very important to start my preparation really well with them and try to reach their targets."

When asked if he can out-perform the achievements of his new teammate Jenson Button, and the man he is replacing, Lewis Hamilton, Perez was adamant: "Definitely, because you are going to the best team and the best team normally wins. This year, they had many reliability issues and if they solve that they will be ready to fight for the title."

"I think what I am saying is realistic because the team is capable of putting out a very strong car. The targets have to be high. McLaren wants to win every single race.

"I must be very competitive from the first race. So I'm really looking forward to being in Melbourne. I'm sure that we will be fighting for the championship next year."

Widely tipped to go to Ferrari and replace Felipe Massa, Perez was not signed by the Maranello outfit even though he is part of its Young Driver Programme, instead the Brazilian veteran was retained for another year.

Explaining the decision, Luca di Montezemolo said that Perez was not yet ready for a top flight team, a claim that many in the paddock agree with. Indeed, the readers comments in the Daily Mail almost unanimously suggest the youngster is riding for a fall.