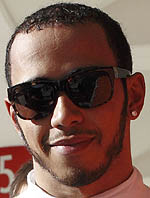 Lewis Hamilton has revealed his disappointment that former teammate Heikki Kovalainen was unable to secure a seat for the 2013 F1 season.

The two were teammates at McLaren in 2008 and 2009, the former the year in which the Englishman won the title. However, dropped by the Woking team to make way for Jenson Button, the Finn was unable to secure a seat with a top team and consequently had to settle for a drive with newcomers Lotus, who subsequently morphed into Caterham.

Despite standing head and shoulders above his teammates at the Anglo/Malaysian squad, and delivering performances that belied the cars' competitiveness, the Finn was dropped at the end of 2012 as the team sought a driver who could provide (substantial) funding.

Talking to reporters in Jerez, Hamilton expressed his disappointment at Kovalainen's absence from the 2013 grid.

"When I landed and was coming to the track I was thinking to myself it's such a shame that Heikki's not here," said the Mercedes driver. "Definitely some other people that now have seats, I think whoever gave them the seats are crazy to think that they are better than Heikki.

"I think Heikki's got great calibre, great experience and he deserves to be here," he added, "and he's a good friend of mine so I wish him all the best in whatever he's doing."

A regular on Twitter, Kovalainen has been training hard, though he has yet to announce his plans for the year ahead. That said, should any of the newcomers prove to be out of their depth, the experienced, and very fast, Finn would probably be amongst the first to be considered.