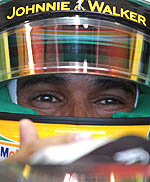 Lewis Hamilton: "I'm very happy with pole position. It's been a good weekend so far, but there are no points for today, and it's going to be a long, tough race, so I still need to be cautious. I hope we've done the work we need to do to put us in a strong position for tomorrow - the key will just be to stay out of trouble and look after the tyres.

"Our guys at the factory have done an incredible job to bring our upgrades to the track this weekend. In previous years, we've often been playing catch-up on development throughout the season, but, this year, we're right there.

"I've always believed that if we could start the season strongly, we'd be able to pull ahead. We've been there or thereabouts all season, but now I think we're starting to see the real strength of my team pull through."

Jenson Button: "I found it a bit tough today; I didn't really feel comfortable with my car, the rear went away from me quite quickly, and I struggled to look after the tyres over a lap. I hope the balance will be better in the race than it was in qualifying.

"The high degradation around here will make it a tricky race, but I think we'll be okay.

"It's going to be tough for everyone on Sunday evening, but you can overtake around here. Starting from fourth means you can hope for the best - a win - but the pace just wasn't quite there for me in qualifying. I hope it's better in the race."

Martin Whitmarsh, Team Principal: "Lewis has been in fantastic form all weekend, and today he showed a tremendous turn of speed to take a superb pole position here in Singapore this evening. Yesterday, too, he looked impressive, showing strong long-run pace in the free practice sessions.

"It was Vodafone McLaren Mercedes' fourth consecutive pole position and the 153rd pole position in McLaren's history, and it was achieved one day shy of the 40th anniversary of our very first world championship grand prix pole position, which was notched up by the late Peter Revson at Mosport Park [Canada] on September 23rd 1972.

"Jenson had a more challenging time of things this evening, but he showed his mettle and his class by posting fourth-best time despite not having been entirely comfortable here today. But he's a magnificent racing driver, as we all know, and he'll be looking to score heavily tomorrow.

"Lewis will be looking to win, of course - and, as long as he gets a clean start, there's no reason why he shouldn't do just that. We never under-estimate our opposition, and undoubtedly tomorrow's race will be a long and difficult one, but you'd have to say that we're in a pretty good position: firing on all cylinders, in fact!"