Hamilton refusing to be distracted 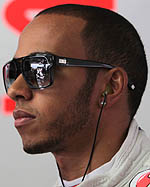 As speculation over his future continues, the man himself, Lewis Hamilton, says he is ignoring it all and concentrating purely on the job in hand, the 2012 world championship.

Even though he has won two of the last three races, and was the innocent victim of Romain Grosjean's over enthusiasm in the third, all talk of the English driver centres on his plans for 2013 and beyond. And when the pundits aren't speculating over Hamilton's ultimate destination they are musing who might fill his seat should he opt to leave Woking.

Speaking at a promotional event in Mumbai at the weekend, Hamilton attempted to put the record straight, and whilst admitting that he pays no attention to the ongoing media frenzy insisted that there is no need to rush into anything..

"I don't have a timeline," he said. "My focus is on trying to win this world championship. Of course I do have to have those things sorted out but I do have people in the background working on those contract negotiations.

"There's a lot of speculation, there's a lot of stories that aren't true," he added. "I think we're all wise enough to understand that people write things and that what is written is not necessarily what is true.

"I think the most important thing is that I'm 100 percent focused on winning with this team and taking them forward. I've been with the team since I was 13 and we've worked so hard since 2009 to try and win this championship and hopefully, finally, we're in the position where we can. So the most important thing is that I do not get distracted by all the rubbish that's been around."

Asked about his title chances, the Englishman, who trails Fernando Alonso by 37 points with 7 races remaining, said: "We lost a lot of points at the beginning. We were on the front row in the first seven or eight races where we should have won all of them.

"Barcelona, we really could have won that, we had the best car that weekend. But you know we learn from those experiences and that's what life is about.

"We're in a very, very strong position, we're getting stronger and we will get stronger through the rest of this year."