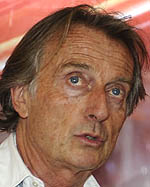 Formula One needs to change if it is to survive, and key among those changes is engaging a younger audience, according to Luca di Montezemolo.

Speaking in Monza the Ferrari boss tabled a number of controversial suggestions which tug at the very fabric of Formula One.

Key among them was a reduction in the race length, claiming both Generations I and Y and don't have the attention span to cope with a 190 mile Grand Prix. This ahead of a race which will probably last around seventy-five minutes.

"Looking at young people, the races are too long," he claimed. "One hour and a half for the young, it's a long time. Maybe why don't we do a test and we do two starts?"

Over its history Formula One races have been forever getting shorter, the current two-hour format achieved to make it more marketable to television networks. As such di Montezemolo's idea is unlikely to ever come to pass, though it was not his only suggestion.

Following the recent pattern of moving races to growing economies and varying the traditional 2pm start time to sit more favourably with key television audiences, di Montezemolo suggests more could be done to maximise audiences by scheduling races later in the day, and outside of holiday periods.

"I don't think it's good to race in July and August at two o'clock in the afternoon, when the people are at the sea and on vacation," he argued. "If you look at a sport like soccer, they play at six o'clock, seven o'clock, eight o'clock.

"Maybe I'm wrong but I think that we have to look very carefully what we can do to improve the show of Formula One," he added. "Maybe it is a mistake, but we have to think of something, we cannot stay always the same...we have to be innovative without losing the F1 DNA.

"Maybe it's better to maintain the races as they are, or maybe it's time to change."