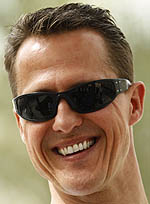 While refusing to be drawn in to any speculation, Ross Brawn has suggested that Michael Schumacher could well continue with Mercedes next year.

The German's current three-year contract ends this year, with many expecting the seven-time champion to continue for at least another season.

Schumacher's seat is one of the most competitive available on the current driver market other than that occupied by Felipe Massa at Ferrari. However, unlike Massa there has been comparatively little speculation over who could replace his former mentor at Mercedes, with only Lewis Hamilton (unlikely) and Paul Di Resta (equally unlikely) linked to the seat.

Despite the pair's long history, Brawn is not interested in Schumacher as a result of any partiality but for more practical reasons. "Consistency with drivers is always a helpful thing," he admitted. "If you believe your drivers are able to deliver, if you give them the opportunity, which I believe our drivers can, then keeping the same drivers and having consistency is an important thing for the team."

Changing drivers, Brawn reasons, impacts the team as it learns how to work with its new star and develop the car to their liking. "There's not much time in modern Formula One," Brawn continued, "so a change in drivers has to be careful, certainly when getting a new driver settled in."

Schumacher currently sits twelfth in the championship, despite his podium finish in the European Grand Prix. When the German has finished a race he's invariably been in the points, however six retirements in eleven races (mostly due to mechanical problems rather than misadventure) see him trailing teammate Nico Rosberg by nearly fifty points in the standings.

Still, at forty-three Schumacher is some way of Louis Chiron's 57-year-old record. Chiron was almost fifty-six (55y 9m 19d to be pedantic - Ed) when he started the 1955 Monaco Grand Prix, while Luis Fagioli won the 1951 French Grand Prix less than a month after his fifty-third birthday (53y 0m 22d).