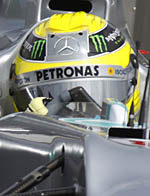 Mercedes has confirmed a race partnership agreement with Bharti Airtel for the 2012 Airtel Indian Grand Prix. The telecommunications company was title sponsor of the inaugural race at the Buddh International Circuit in New Delhi in 2011, and will continue the role this year.

Airtel branding will feature on the airbox and headrest of the W03 , and on the racesuits and helmets of Michael Schumacher and Nico Rosberg, for the duration of the 2012 Airtel Indian Grand Prix weekend.

Bharti Airtel will use the association with Mercedes to further promote Formula One within India, with a host of innovative content and experiences planned both before and during the 2012 Airtel Indian Grand Prix. Michael and Nico will also feature in a television campaign in India to promote the race and Bharti Airtel's involvement.

"The 2011 Airtel Indian Grand Prix was a very successful new adventure for Formula One and we are delighted to now be partnering with Bharti Airtel, who have supported the sport in India from the outset," said ross Brawn. "Taking our sport to new audiences is vital for our future and we are very much looking forward to working with Bharti Airtel in the run-up to this year's race, in order to bring our fantastic sport closer to the Indian fans."

"As title sponsors, we at Bharti Airtel are proud to have been an integral part of India's first Formula One race last year," added Bharat Bambawale, Global Brand Director at Bharti Airtel. "We are today delighted to enter a new lap of our brand's Formula One journey with an exciting alliance with the Mercedes Formula One Team. In 2011, Bharti Airtel took the lead in bringing India's Formula One dreams alive and became 'Title Sponsor' of the sport's debut in the country. Bharti Airtel and Mercedes are associated with traits of speed, performance and fast-paced growth, thus making this partnership a perfect match between two like-minded brands. By building on the unique motorsport heritage and strong track record of Mercedes-Benz, we will strengthen Bharti Airtel's youthful positioning and appeal to Formula One fans across India."