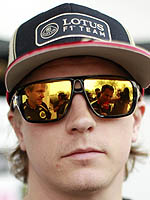 Lotus will admit it's not really Lotus. Bernie Ecclestone will abandon his capitalist ways. Kimi Raikkonen will rejoin Ferrari.

Yes, it will be a cold day in hell before any of that happens.

Raikkonen has been linked with a return to the team with which he won the 2007 world championship by people one would assume are ordinarily capable of tying their own shoelaces.

Raikkonen did not leave Maranello in the happiest of ways, unceremoniously dumped and paid to sit out a season so Fernando Alonso could join.

Given that experience, and the fact the Lotus team seems willing to bend its own rules to accommodate him, why would the Finn even consider wearing red again?

There is nothing to suggest Raikkonen has held talks, or will be holding talks, in terms of a return to Maranello. Indeed beyond the rumour of Raikkonen going to Ferrari there is no substance to it whatsoever.

Of course Raikkonen is not the first and won't be the last to have the paddock losing all sense of reason. Earlier in the year Mark Webber was linked to the seat, though in fairness there was some truth in that since it turned out the Australian did actually have talks with the team.

Caterham's Heikki Kovalainen has been linked with a move, which makes sense given the talented Finn has out-driven the dog of a car with which he's been lumbered with for three seasons. But even though it makes sense it doesn't mean there's any more to it than just a rumour.

Sergio Perez is part of the team's driver academy and has been linked with the seat currently occupied by Felipe Massa while the more mischievous might suggest Paul di Resta could go there - his father has always had Ferrari's, after all.

It is understood Ferrari has allowed its option on Massa's services for 2013 to lapse, suggesting the team is on the lookout for a new driver. But then it might just want to negotiate new terms with the Brazilian who has had the support - at least publicly - of Stefano Domenicali.

The simple fact of the matter is nobody outside of Ferrari knows what the future holds, and it's a leap of logic to assume even they're certain.

That said, some of the speculation, borders on the downright ludicrous. when asked by Pitpass about talk of Jenson Button heading to Maranello a McLaren spokesman could barely contain his amusement. "It's total nonsense," he replied.

Now, about the Lotus thing…