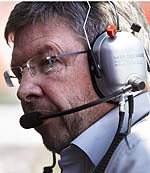 Team bosses are facing a difficult period as they look to begin serious work on their teams 2013 cars, while continuing to develop their current car for as long as possible. Complicating matters are a set of significantly different regulations for 2014, which will force a completely new design.

While debate on the topic has raged for some time it seems certain that Formula One will change to smaller capacity turbo charged engines for 2014. It was a change that was originally scheduled for 2013, but was delayed due to cost concerns, amongst other things.

Formula One's commercial boss Bernie Ecclestone has been critical of the new regulations, while even the circuits have expressed concern at the sport's move to turbo engines. Both Ecclestone and the circuits are worried that the sound of the new engines will not appeal to fans, suggesting noise is a critical factor in what makes Formula One the spectacle it is, driving down attendance and potential profit.

Renault is less concerned, and has been working on developing its new engine for some time. Indeed, the French car company at one point threatened to pull out of the sport should the new engine regulations not come in.

Teams now face a difficult balancing act. With limited resources they must decide how much of this year's car can be carried over to 2013 in order to free up resources to look at the significant changes for the following year, or whether they commit more resources to next year's car now and perhaps slow development earlier than usual in 2013 to focus on the 2014 car.

"We will be looking very carefully at what programme we put together for next year to make sure we leave as much resources as we can for 2014," said Brawn. "We're always doing that, we're trying to balance our efforts but when regulation changes come along let's say the equation changes a little bit and with RRA you can't just add more resource to compensate, you have to do it with the resources you've agreed to limit yourself to.

"I think every team will be looking at their resources with such an important project coming up in 2014."