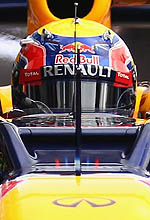 Red Bull has been in the headlines again after suggestions the team may have used a system to adjust the ride height of its cars in parc ferme conditions.

The story originated in the German press where it was implied that with the previous system the team could have changed the car's front ride height in parc ferme. It was a point strenuously denied by the team which reaffirmed that it has been entirely compliant with the regulations all season.

What's more the allegations are not even current. They stem from the Canadian Grand Prix, when the FIA advised Red Bull that adjustments to its front dampers must be made using a tool rather than by hand, in line with Article 34.5 of the Sporting Regulations.

Technical regulations stipulate that some adjustments need to be made using a tool, depending on the 'work' required to carry out the change. In Red Bull's instance the FIA deemed the dampers could be adjusted too easily by hand and therefore asked the team to make them tool adjusted instead.

The changes requested by the FIA were made to the car after the Canadian Grand Prix, the car having run in its current configuration ever since.