Maldonado: I was scared for all of us 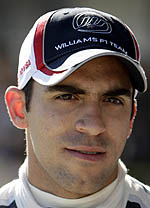 Pastor Maldonado has spoken of how his joy turned to horror when, moments after posing for a team photo to celebrate his Barcelona win, a garage fire almost ended in tragedy.

"At that moment I was so scared for all of us," told reporters in a Williams conference call this morning. "I think we were so lucky because we had no big damage and especially because our people were okay."

In the mainstream media, images of Maldonado standing atop an F1 podium for the first time, and Williams first visit since 2004, gave way to pictures of the Venezuelan driver carrying his terror-stricken 12-year-old cousin to safety, the youngster wearing a cast on his foot from a previous injury.

"I saw my cousin who was with a small injury, I took him and brought him away from the box," said Maldonado. "It was a difficult moment for all the team but we've been so happy even after that because of the win."

Looking ahead to Monaco, where in 2011 he was running sixth before colliding with Lewis Hamilton just five laps from the end of the race, he said: "We will do our best. As you see, all the teams are so close, the championship is so close and the gap is so close. We are getting better and better all the time.

"At the moment we don't have the quickest car on the track," he continued, "but we are doing our best and why not? Formula One is changing all the time. It's going to be difficult but we will try again.

"The season is unpredictable," he added, a masterpiece of understatement. "I think it is more competitive, it has become like a GP2 championship. It becomes very strong, the drivers can make the difference... it's a bit boring when you see only one car winning."

Asked about tyres, which appear to be the deciding factor this season, he said: "Tyre degradation is quite big and it is true that you need to manage them. This is part of the race and it's the same for everybody. There are no easy races. We need to adapt to the tyres, to the rules, to the car."