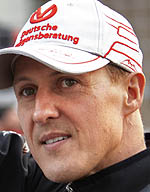 Michael Schumacher has been handed a five-place grid penalty for the Monaco Grand Prix following an incident in today's race at Barcelona.

The German went into the back of Bruno Senna's Williams at Turn 1 shortly after his pit stop, subsequently branding the Brazilian an "idiot" over his team radio.

The stewards however, saw it slightly differently finding Schumacher guilty of causing a collision - an incident as defined by Article 16.1 of the FIA Formula One Sporting Regulations - and hitting him with a place penalty for the forthcoming event in Monaco.

"Obviously I am not happy with the outcome of the race as I think we could have achieved some nice points today," said Schumacher. "But then this is sometimes what you have to go through in racing.

"It is not easy to see from the TV replays but what happened from my viewpoint was that he went to the right to defend the inside line, and then suddenly, shortly before the braking point, went to the left. When you are so tight together in the braking zone, you have no other choice than to try to react and avoid hitting but it was too late."

Senna, who was also eliminated in the accident agreed with the stewards subsequent decision, asking when Schumacher was last heard to admit to a mistake.

"It was difficult to overtake at the beginning of the race," he added later, "and then Schumacher got a big DRS boost coming down the straight and went into the back of me."