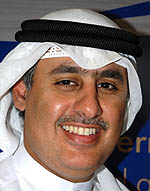 The boss of the Bahrain circuit, Zayed R Alzayani (right), insists that the Grand Prix will help unite the country, whilst denying that the event is being used as a PR exercise.

"It is very sad what has happened, but we cannot go back and change history," he told Radio 4's Today programme, "we have to learn from it and move on. I think the grand prix is required for Bahrain because we need to get started back on track. The country has suffered, the economy has suffered."

Whilst many are increasingly coming round to Mike Lawrence's belief that the event is being used a political football in order to send out a message to the wider world, Alzayani refutes this.

"I disagree," he said. "The race is not taking place for the authorities, the race is taking place because Bahrain has been the home of motorsport in the Middle East. We have hosted seven previous grands prix and a majority of the attendance is not the authorities or the royal family, it is fans of F1 and motorsport in general. We have a regional event, so quite a few spectators come from neighbouring countries, and it would not be right to deprive them of this event.

"I don't know why we are being dragged into the politics of the event," he added. "We are a social event, we are a sports event and we would like it to stay that way."

Alzayani subsequently claimed the event will bring an injection between £150m to £250m to all levels of the Bahrain economy.

Speaking in the same debate, Damon Hill, who earlier this week appeared to experience an epiphany, going back on comments made just a few weeks earlier when he gave his full support to the race, repeated his claim that by holding the event F1 will appear "indifferent" to the situation in the Gulf state, indeed, it may even appear to condone what is happening.

"I think at the moment it is hotting-up, which is not a good state of affairs to be wanting to go to Bahrain, when it is actually getting more inflamed," he said.

"We have Al-khawaja in a serious situation, with two weeks to go," he continued, referring to Abdulhadi al-Khawaja, founder of the Bahrain Centre for Human Rights, who is in the eighth week of a hunger strike. "It is a very difficult call and my concern is that F1 is perceived to be indifferent, and that would be really damaging for F1.

"I think under the right circumstances it would be OK," he added. "I don't doubt that they could hold the grand prix, but in order to hold the grand prix they would have to impose very serious security measures to prevent protestors making their point, then it would appear that the event is taking place on one side of the argument. That is the worry for the reputation of the sport; that it is actually taking political sides."

"Bahrain is nothing like as bad as the terrible situation in Syria," added Richard Burden MP, who on Friday urged the FIA to rethink its decision to go ahead with this year's Grand Prix. "And F1 teams do race in other countries with unenviable human rights records. But that does not mean it is right for F1 to collude in presenting to the outside world a cocooned picture of normality at the Bahrain International Circuit, when what is likely to be going on just few miles outside the circuit could be very different."