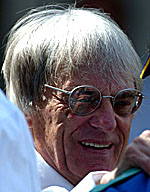 As the F1 and Bahrain Grand Prix PR machine hits warp speed, Bernie Ecclestone has blamed the media for the negativity surrounding the event.

Speaking in London, at an event attended by members of said media, Zayed Alzayani, chairman of the Bahrain International Circuit and a number of team bosses, Ecclestone once again gave his whole hearted support to the forthcoming race, insisting that not only is there nothing to fear when the F1 circus arrives next month, any fears surrounding the event have been the cause of the press and its scaremongering.

"The press should just be quiet and deal with the facts rather than make up stories," said the F1 supremo, ironically using the media to get his 'nothing to see here' message across to the world.

"The race is going to happen. No worries at all," he continued. "What I don't understand are the negative statements being made, people catching them and continuing them. They're saying things they don't understand. People say to me 'Oh there's not going to be a race'. I say 'How do you know?' 'Ah, we know because we saw, we read or we heard' or something like that. It's all nonsense.

"Forget the financial side, it's nothing to do with that at all," he insisted. "These people were brave enough at the beginning to start an event in that part of the world. That's it. We'll be there as long as they want us."

While those present pointed to examples of crime and human rights abuses in various other parts of the world, what they clearly don't get, and what forms the basis for this particular media outlet's stance on the matter, is that in this particular case the sport is clearly being used by various parties in order to make a statement.

Alzayani's, quip that yesterday's luncheon being a "PR offensive" pretty much proving the point.