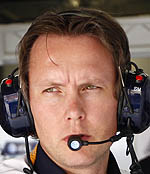 Sam Michael has begun work for McLaren, the team has confirmed to Pitpass. Starting on November 1, the Australian has assumed the role of Sporting Director following his resignation from Williams earlier in the year.

Having endured its worst season in the teams history, Michael tendered his resignation to Williams in May before formally parting ways after the Singapore Grand Prix.

It's understood that Michael will only attend one Grand Prix this season and is not allowed to sit on the pit wall as part of a deal cut with Williams to allow his early release. We also understand that as part of the deal he is not allowed to wear McLaren teamwear or conduct interviews with the media.

"If I can get to a race this year it lets me observe what they're up to," said Michael of his new role in Singapore. "It's much better to do that than to have the winter to think about things and go straight in to Melbourne because then you're just reacting to what you're seeing.

"You're better off to have that feedback straight away, and they're all about wanting to start off the year, next year, right from being competitive."