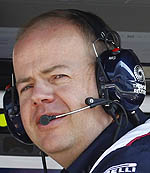 Can you describe the technical challenge provided by the new Buddh International Circuit?
One of the biggest issues has been a logistical one; making sure that all our car parts arrived on time. Thankfully we have an excellent coordination team and everything made it to the track on time.

With regards the actual circuit running, the track was extremely dirty with a significant track evolution throughout each session. In turn, this then masked the tyre degradation making it difficult to fully compare the soft and hard tyre performances within a session, prior to the race.

AT&T Williams did a lot of simulator work prior to the Indian GP. How much fine-tuning did the car require once the on-track action started?
Our preparation was very good and we required very little unplanned set-up tuning during the event.

How would you describe the performance of the FW33 at Buddh International Circuit?
We made a decent step forward in performance, especially in our long run pace, from Korea to India which was helped with a well correlated (wind tunnel to track) floor upgrade.

Let's talk tyres. In hindsight, were Pirelli right to bring their hard and soft compounds to the race?
I understand Pirelli's reasoning for bringing the hard tyre and indeed both the hard and soft tyres performed much better than we expected in terms of tyre wear and general performance. Rubens' long run in the race on the hard tyre was consistent and reasonably quick.

Pastor had a disrupted opening day of practice. How much did that affect his progress for the remainder of the weekend?
Any loss in track time on a new track will upset one's overall weekend preparation and as a team we are striving hard to eliminate such downtime. Saying that, Pastor did a good job in qualifying and his race pace, prior to his gearbox failure, was good.

Rubens' lap times were pretty competitive towards the end of the race. How much encouragement does that give you?
As mentioned we have made a step in the right direction with our floor upgrade and Rubens' pace was strong on both the hard and soft tyres, despite having to pit early after breaking his front wing.

Abu Dhabi comes next. Rubens qualified seventh there last year; do you think the FW33 has Q3 potential at the track this year?
We need to ensure we have a trouble free weekend and then it is possible that we can make it into Q3, although as Pastor will use a ninth engine in Abu Dhabi, due to damage incurred following the gearbox failure in India, he will therefore incur a subsequent 10-place grid penalty. Rubens will use a new eighth engine.